By: World Wide Stereo Team
Last Thursday night, on a grand stage at the Bowery’s Capitale in New York, our founder and fearless leader Bob Cole was inducted into the Consumer Technology Hall of Fame. As a result, Bob is now forever part of a small and very exclusive group of movers, shakers, heroes, and visionaries throughout history in our industry — leaders, who, according to the Consumer Technology Association (CTA), “advance innovation and develop, market, and promote the technologies that improve consumers’ lives.” (Case in point: Fellow 2018 inductees included the father of DSL, the X10 founder, and the team that founded Skype, to name a few.) In all, it was a very big day for World Wide Stereo, and worthy of a few closing thoughts from those of us who’ve known and worked with Bob, some close to 40 years.

First, if some things were meant to be, Bob’s Hall of Fame recognition is certainly one of them – and we couldn’t be happier for Bob, or prouder to know him. Second, we’re here to tell you: karma and kismet have nothing at all to do with Bob’s success. The man got where he is thanks to a “no guts, no glory” approach to everything, a nose for what’s next, and a love of bringing families together around beautiful music and goosebump-raising movies at home. His enthusiasm for what we do is as infectious as his “never say never” attitude. And as bosses go, Bob is awesome.

In his acceptance speech, Bob graciously credited the entire World Wide Stereo team for the company’s 40 years’ success, so boo on us if we don’t stop for a moment, pat ourselves on the back, and acknowledge the fact that A) we now have a bona fide Hall of Famer in the house, and B), how it all happened is as interesting as it is, well, circuitous… Check out the video below to hear Bob’s acceptance speech, and read on for Bob’s story…

Before Bob opened the World Wide Stereo doors in 1979 with his wife Karen by his side, he was a clinical psychologist leading a mental health program at Albert Einstein in Philadelphia. After funding for his clinical work ended and left him with an administrative job, he quit. Out of his passion for music and gadgets, he went to work for a retail franchise called World Wide Stereo as a salesman and troubleshooter, sent to resuscitate dying stores. When the franchise went out of business, he opened up his own version in Montgomeryville, PA with $2,000 and a bank loan. And the rest, as they say, is history.

Do well by doing good.

For almost 40 years, World Wide Stereo has been at the forefront of the industry, with Bob leading the team every step of the way. As annual sales continued to climb, Bob opened a second retail store in Ardmore, an e-commerce website, and multiple distribution centers.

While WWS sells the finest Audio Video products in the world, and is the “signature dealer” for most of our vendors, from the beginning it has always been about one thing: to improve the quality of life of our customers through electronics. To transport them into new realities — whether it be an Academy Award-winning film or a song by their favorite artist. That’s the experience — the “goosebumps” — we’re here to sell and help customers recreate, whether at home, in the car, etc.

If you ask Bob about the inspiration for his business philosophy, he’ll tell you it came from his Catholic schooling. One of his teachers once asked him, “How are you doing, Robert?” and he replied, “I’m doing good, sister!” She gave him a rap and told him that the Pope did good, that Bob needed to do well. He replied, “Why can’t I do well by doing good?” The smart-alecky reply got him another rap, but the philosophy stuck. As a result, World Wide Stereo became known for doing good via passionate customer service and employee loyalty.

Left to right: Bob at the counter helping customers. Bob and Ron chatting about their first day…

Giving back to the community.

Doing well by doing good also means giving back to the community. Over the decades, Bob and World Wide Stereo have done pro bono work for various charities, including children’s groups. With assistance from the ELF Foundation, Bob had a full-blown theater installed in the Ronald McDonald house that is attached to St. Christopher’s Hospital for Children in Philadelphia. Bob and World Wide Stereo built a theater for the Pediatric Oncology Unit at St. Christopher’s Hospital. (Both theaters run constantly.) Recently, World Wide Stereo raised over $12,000 and pulled a plane for Philadelphia Ronald McDonald House, and was named one of the charity’s premier corporate partners. 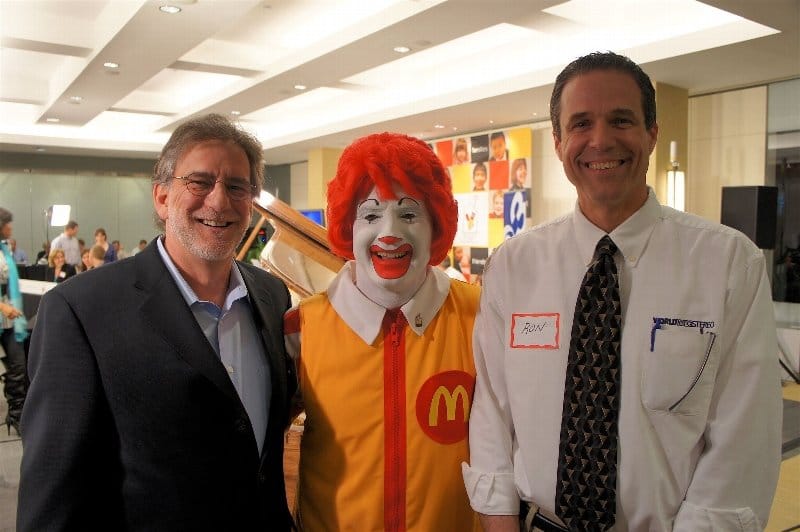 Bob and Ron at the Ronald McDonald House in Philadelphia 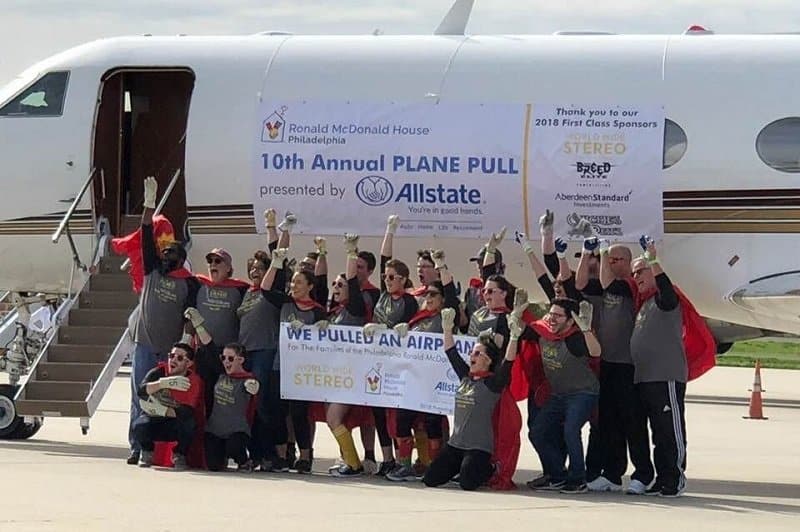 The World Wide Stereo team celebrates after pulling a plane and raising $12,000 for the Ronald McDonald House